Roger K. Beedle, a retired engineer, was of assistance to the Jekyll Island Authority predominantly through the years of 1968-1978. Under his direction, a number of the island’s historic buildings were returned to active use. Beedle oversaw the Jekyll Island Authority’s efforts to maintain the buildings, documenting them as they were at that time, as well as recording the many changes accomplished during his ten-year involvement. 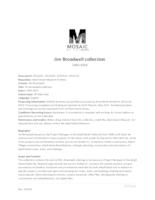